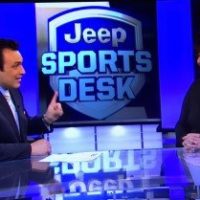 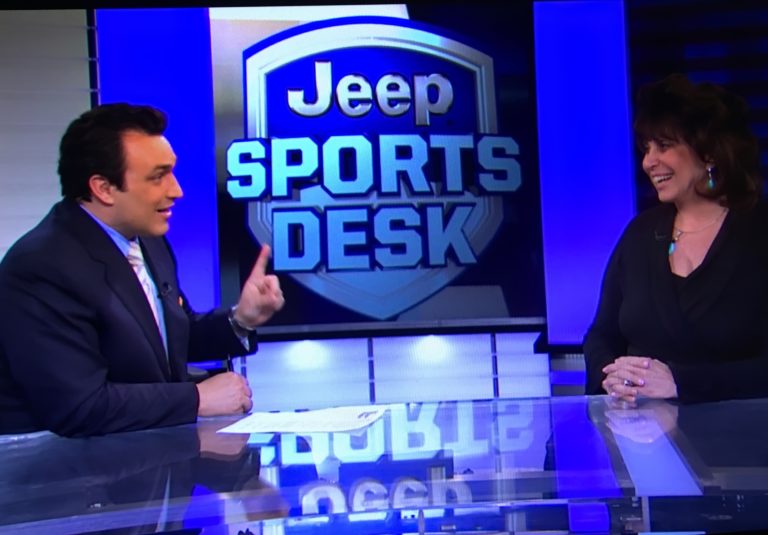 Here is the link to my appearance: http://newyork.cbslocal.com/2016/03/27/steve-overmyer-sits-down-with-famed-trial-lawyer-linda-kenney-baden/

Linda Kenney Baden recently appeared on the Emmy Award winning show Sports Desk hosted by Steve Overmyer on CBS-2 NY (CBS local in NY Twitter https://twitter.com/CBSNewYork). The topic of their discussion was the recent announcement by FanDuel and DraftKings to suspend operations in New York (even though there was a ruling that allowed them to temporarily operate) until September when the appeal of the fantasy leagues lawsuit would be heard. In return for the suspension by two of the biggest fantasy sports operators- DraftKings and FanDuel, the Attorney General (AG) of New York Eric Schneiderman agreed to stay part of the litigation filed by NY state against the sites- that having to do with the underlying restitution claims. The AG is allowed to continue the false advertising and false practices part of the litigation, commonly known as consumer fraud. Yahoo said it was leaving the NY market this week and is not involved in this agreement. This stay does not affect the civil suits for fraud.

This deal may have been reached because of a legislative bill that not only seems to have a good chance of becoming law, but one that is has immediate favorable outcome for the fantasy sports companies. It would legalize fantasy sports in New York State, to be followed by governmental regulation.
What does this immediately mean for the contestant as the fantasy sites call their customers, or the consumer the AG calls fantasy sports “victims?”

The history of how this all came about was the adoption of the UNLAWFUL INTERNET GAMBLING ENFORCEMENT ACT OF 2006 (UIGEA). The act made it illegal for banks or similar financial funding institutions to transact with online gambling sites.The UIGEA exempted fantasy sports from this federal law’s reach with the following: that it does not apply to such that “has an outcome that reflects the relative knowledge of the participants, or their skill at physical reaction or physical manipulation (but not chance), and, in the case of a fantasy or simulation sports game, has an outcome that is determined predominantly by accumulated statistical results of sporting events, including any non-participant’s individual performances in such sporting events…” Fantasy sports sites such as Fan Duel and Draft Kings argued that they are not subject to any state internet gambling law because contestants use skill- analyzing statistics, facts, game theory and their own knowledge to compete. Since fantasy sports were specifically exempted from the above federal law,they have argued therefore, no state has no power to regulate them under gambling statutes. This fight has been a losing one so far in part, bought on my the amount of money the sites generate, and the recent allegations of fraud. Since states can regulate consumer affairs, the argument about whether fantasy competitions are internet gambling has been relegated to a second tier argument in litigation between the states and the sites.

For those of you interested into text of the entire bill- here it is:

Introduced by Sen. BONACIC — read twice and ordered printed, and when
printed to be committed to the Committee on Racing, Gaming and Wager-
ing

AN ACT to amend the racing, pari-mutuel wagering and breeding law and
the financial services law, in relation to interactive fantasy sports

THE PEOPLE OF THE STATE OF NEW YORK, REPRESENTED IN SENATE AND ASSEM-
BLY, DO ENACT AS FOLLOWS:

Section 1. The racing, pari-mutuel wagering and breeding law is
amended by adding a new article 15 to read as follows:
ARTICLE 15
INTERACTIVE FANTASY SPORTS
SECTION 1500. LEGISLATIVE FINDINGS AND PURPOSE.
1501. DEFINITIONS.
1502. REGISTRATION.
1503. REQUIRED SAFEGUARDS/MINIMUM STANDARDS.
1504. SCOPE OF REGISTRATION REVIEW.
1505. STATE TAX.
S 1500. LEGISLATIVE FINDINGS AND PURPOSE. THE LEGISLATURE HEREBY FINDS
AND DECLARES THAT:
1. UNDER THE NEW YORK PENAL LAW A PERSON ENGAGES IN GAMBLING WHEN HE
OR SHE STAKES OR RISKS SOMETHING OF VALUE UPON THE OUTCOME OF A CONTEST
OF CHANCE OR A FUTURE CONTINGENT EVENT NOT UNDER HIS OR HER CONTROL OR
INFLUENCE, UPON AN AGREEMENT OR UNDERSTANDING THAT HE OR SHE WILL
RECEIVE SOMETHING OF VALUE IN THE EVENT OF A CERTAIN OUTCOME;
2. INTERACTIVE FANTASY SPORTS IN MANY INSTANCES HAVE BEEN DEFINED AS A
GAME OF SKILL AND WERE EXEMPTED FROM THE DEFINITION OF UNLAWFUL INTERNET
GAMBLING UNDER THE UNLAWFUL INTERNET GAMBLING ENFORCEMENT ACT OF 2006
(31 U.S.C. S 5362);
3. INTERACTIVE FANTASY SPORTS CONSIST OF FANTASY OR SIMULATION SPORTS
GAMES OR EDUCATIONAL GAMES OR CONTESTS IN WHICH THE FANTASY OR SIMU-
LATION SPORTS TEAMS ARE SELECTED BASED UPON THE SKILL AND KNOWLEDGE OF
THE PARTICIPANTS AND NOT BASED ON THE CURRENT MEMBERSHIP OF AN ACTUAL
TEAM THAT IS A MEMBER OF AN AMATEUR OR PROFESSIONAL SPORTS ORGANIZATION.
AS GAMES OF SKILL, INTERACTIVE FANTASY SPORTS CONTESTS DO NOT FALL UNDER
THE DEFINITION OF GAMBLING AS PROHIBITED BY THE PENAL LAW; AND
4. THE LEGISLATURE FURTHER FINDS THAT AS THE INTERNET HAS BECOME AN
INTEGRAL PART OF SOCIETY, AND INTERACTIVE FANTASY SPORTS A MAJOR FORM OF

EXPLANATION–Matter in ITALICS (underscored) is new; matter in brackets
[ ] is old law to be omitted.
LBD14229-01-6

2. PROHIBIT THE REGISTRANT FROM BEING A CONTEST PARTICIPANT IN SUCH A
FANTASY SPORTS CONTEST THAT HE OR SHE OFFERS.
3. PREVENT THE EMPLOYEES OR AGENTS OF THE REGISTRANT FROM SHARING
CONFIDENTIAL INFORMATION THAT COULD AFFECT SUCH FANTASY SPORTS PLAY WITH
THIRD PARTIES UNTIL THE INFORMATION IS MADE PUBLICLY AVAILABLE.
4. VERIFY THAT CONTEST PARTICIPANT IS EIGHTEEN YEARS OF AGE OR OLDER.
5. RESTRICT AN INDIVIDUAL WHO IS A PLAYER, GAME OFFICIAL, COACH, OR
OTHER PARTICIPANT IN A REAL-WORLD GAME OR COMPETITION FROM PARTICIPATING
IN SUCH A FANTASY SPORTS CONTEST THAT IS DETERMINED IN WHOLE OR IN PART
ON THE PERFORMANCE OF THAT INDIVIDUAL, THE INDIVIDUAL’S REAL-WORLD TEAM,
OR THE ACCUMULATED STATISTICAL RESULTS OF THE SPORT OR COMPETITION IN
WHICH HE OR SHE IS A PLAYER, GAME OFFICIAL, OR OTHER PARTICIPANT.
6. ALLOW INDIVIDUALS TO RESTRICT OR PREVENT THEIR OWN ACCESS TO SUCH A
FANTASY SPORTS CONTEST AND TAKE REASONABLE STEPS TO PREVENT THOSE INDI-
VIDUALS FROM ENTERING A FANTASY SPORTS CONTEST.
7. DISCLOSE THE NUMBER OF ENTRIES A SINGLE FANTASY SPORTS CONTEST
PLAYER MAY SUBMIT TO EACH SUCH FANTASY SPORTS CONTEST AND TAKE REASON-
ABLE STEPS TO PREVENT PLAYERS FROM SUBMITTING MORE THAN THE ALLOWABLE
NUMBER.
8. ENSURE PARTICIPANTS’ FUNDS ARE HELD IN ACCOUNTS SEGREGATED FROM THE
FUNDS OF REGISTRANTS AND OTHERWISE PROTECTED FROM CORPORATE INSOLVENCY,
FINANCIAL RISK OR CRIMINAL OR CIVIL ACTIONS AGAINST THE REGISTRANT.
9. PROTECT, TO A REASONABLE DEGREE OF CERTAINTY, THE PRIVACY AND
ONLINE SECURITY OF PARTICIPANTS IN SUCH INTERACTIVE FANTASY SPORTS.
10. ENSURE, TO A REASONABLE DEGREE OF CERTAINTY, THE FAIRNESS AND
HONESTY OF SUCH INTERACTIVE FANTASY SPORTS AND THAT APPROPRIATE MEASURES
ARE IN PLACE TO DETER, DETECT AND, TO THE EXTENT REASONABLY POSSIBLE, TO
PREVENT CHEATING, INCLUDING COLLUSION, AND USE OF CHEATING DEVICES,
INCLUDING USE OF SOFTWARE PROGRAMS (SOMETIMES REFERRED TO AS “BOTS” OR
“SCRIPTS”) THAT PLACE ENTRY FEES OR ADJUST THE PLAYERS SELECTED BY A
FANTASY SPORTS PARTICIPANT.
11. PREVENT PROHIBITED PARTICIPANTS FROM MAINTAINING ACCOUNTS OR
ENTERING SUCH INTERACTIVE FANTASY SPORTS CONTESTS OFFERED BY ANY INTER-
ACTIVE FANTASY SPORTS REGISTRANT.
12. MINIMIZE COMPULSIVE PARTICIPATION IN SUCH INTERACTIVE FANTASY
SPORTS CONTESTS AND PROVIDE NOTICE TO PARTICIPANTS OF RESOURCES AVAIL-
ABLE TO HELP COMPULSIVE PARTICIPATION IN FANTASY SPORTS CONTESTS.
S 1504. SCOPE OF REGISTRATION REVIEW. 1. THE DIVISION SHALL REQUIRE
THAT EACH APPLICANT, OTHER THAN NONCOMMERCIAL CONTEST OPERATORS, SUBMIT
AN APPLICATION SETTING FORTH:
(A) THE FULL NAME OF THE APPLICANT.
(B) IF A CORPORATION, THE NAME OF THE STATE IN WHICH INCORPORATED AND
THE NAMES AND ADDRESSES OF THE OFFICERS, DIRECTORS, AND SHAREHOLDERS
HOLDING FIVE PERCENT OR MORE EQUITY OR, IF A BUSINESS ENTITY OTHER THAN
A CORPORATION, THE NAMES AND ADDRESSES OF THE PRINCIPALS, PARTNERS, OR
SHAREHOLDERS HOLDING FIVE PERCENT OR MORE EQUITY.
(C) THE NAMES AND ADDRESSES OF THE ULTIMATE EQUITABLE OWNERS FOR A
CORPORATION OR OTHER BUSINESS ENTITY, IF DIFFERENT FROM THOSE PROVIDED
UNDER PARAGRAPH (B), UNLESS THE SECURITIES OF THE CORPORATION OR ENTITY
ARE REGISTERED PURSUANT TO S 12 OF THE SECURITIES EXCHANGE ACT OF 1934,
15 U.S.C. SS 78A-78KK; AND IF SUCH CORPORATION OR ENTITY FILES WITH THE
UNITED STATES SECURITIES AND EXCHANGE COMMISSION THE REPORTS REQUIRED BY
S 13 OF THAT ACT OR IF THE SECURITIES OF THE CORPORATION OR ENTITY ARE
REGULARLY TRADED ON AN ESTABLISHED SECURITIES MARKET IN THE UNITED
STATES.

(D) THE ESTIMATED NUMBER OF INTERACTIVE FANTASY SPORTS CONTESTS TO BE
CONDUCTED ANNUALLY.
(E) A STATEMENT OF THE ASSETS AND LIABILITIES OF THE APPLICANT.
2. THE DIVISION MAY REQUIRE THE NAMES AND ADDRESSES OF THE OFFICERS
AND DIRECTORS OF ANY DEBTOR OF THE APPLICANT, AND OF THOSE STOCKHOLDERS
WHO HOLD MORE THAN TEN PERCENT OF THE STOCK OF THE DEBTOR.
3. FOR EACH INDIVIDUAL LISTED IN THE APPLICATION AS AN OFFICER OR
DIRECTOR, A COMPLETE SET OF FINGERPRINTS THAT HAS BEEN TAKEN BY AN
AUTHORIZED LAW ENFORCEMENT OFFICER. THESE SETS OF FINGERPRINTS MUST BE
SUBMITTED TO THE FEDERAL BUREAU OF INVESTIGATION FOR PROCESSING. FOREIGN
NATIONALS SHALL SUBMIT SUCH DOCUMENTS AS NECESSARY TO ALLOW THE DIVISION
TO CONDUCT CRIMINAL HISTORY RECORDS CHECKS IN THE INDIVIDUAL’S HOME
COUNTRY. THE APPLICANT MUST PAY THE COST OF PROCESSING. THE DIVISION MAY
CHARGE A TWO DOLLAR HANDLING FEE FOR EACH SET OF FINGERPRINT RECORDS.
4. (A) A PERSON OR ENTITY IS NOT ELIGIBLE FOR LICENSURE AS A CONTEST
OPERATOR OR THE RENEWAL OF A LICENSE IF THE PERSON OR AN OFFICER OR
DIRECTOR OF THE ENTITY HAS BEEN CONVICTED OF A FELONY IN THIS STATE, A
FELONY IN ANY OTHER STATE WHICH WOULD BE A FELONY IF COMMITTED IN THIS
STATE UNDER THE LAWS OF THIS STATE, OR A FELONY UNDER THE LAWS OF THE
UNITED STATES, OR IF THE APPLICANT FOR SUCH REGISTRATION HAS BEEN
CONVICTED OF A FELONY OR MISDEMEANOR IN THIS STATE, IN ANY OTHER STATE,
OR UNDER THE LAWS OF THE UNITED STATES, IF SUCH FELONY OR MISDEMEANOR IS
RELATED TO GAMBLING OR BOOKMAKING.
(B) THE TERM “CONVICTED” MEANS HAVING BEEN FOUND GUILTY, WITH OR WITH-
OUT ADJUDICATION OF GUILT, AS A RESULT OF A JURY VERDICT, NONJURY TRIAL,
OR ENTRY OF A PLEA OF GUILTY OR NOLO CONTENDERE.
5. THE CONTEST OPERATOR SHALL PROVIDE EVIDENCE OF A SURETY BOND IN THE
AMOUNT OF ONE MILLION DOLLARS, PAYABLE TO THE STATE, FURNISHED BY A
CORPORATE SURETY AUTHORIZED TO DO BUSINESS IN THE STATE IN SUCH A FORM
AS ESTABLISHED BY DIVISION RULE. SUCH BOND SHALL BE KEPT IN FULL FORCE
AND EFFECT BY THE CONTEST OPERATOR DURING THE TERM OF THE LICENSE AND
ANY RENEWAL THEREOF.
S 1505. STATE TAX. REGISTRANTS ENGAGED IN THE BUSINESS OF CONDUCTING
INTERACTIVE FANTASY SPORTS PURSUANT TO THIS ARTICLE SHALL PAY A PRIVI-
LEGE TAX, BASED ON THE REGISTRANT’S PERCENTAGE OF INTERACTIVE FANTASY
SPORTS GROSS REVENUE GENERATED FROM NEW YORK PARTICIPANTS, AT A FIFTEEN
PERCENT RATE.
S 2. Section 403 of the financial services law is amended by adding a
new subsection (e) to read as follows:
(E) THE SUPERINTENDENT IS DIRECTED TO ESTABLISH WITHIN THE FINANCIAL
FRAUDS AND CONSUMER PROTECTION UNIT A FANTASY SPORTS CONTESTS DIVISION
WHICH SHALL HAVE THE POWER AND DUTY TO:
(I) ENFORCE THE PROVISIONS OF ARTICLE FIFTEEN OF THE RACING, PARI-MU-
TUEL WAGERING AND BREEDING LAW;
(II) ACCEPT AND INVESTIGATE COMPLAINTS OF ANY KIND FROM CONSUMERS AND
ATTEMPT TO MEDIATE SUCH COMPLAINTS WHERE APPROPRIATE;
(III) INITIATE PROPER ENFORCEMENT PROCEEDINGS WHERE SUCH ACTION IS
DEEMED BY THE SUPERINTENDENT TO BE NECESSARY OR APPROPRIATE; AND
(IV) DEVELOP AND IMPLEMENT CONSUMER OUTREACH AND EDUCATION PROGRAMS
CONSISTENT WITH THE OBLIGATIONS OF THE CONSUMER PROTECTION UNIT AS SET
FORTH IN THIS SECTION.
S 3. This act shall take effect immediately; however, if an applicant
for an interactive fantasy sports registration was offering interactive
fantasy sports contests to New York residents prior to November 10,
2015, they may continue to offer the same contests to New York residents
during the pendency of their application.