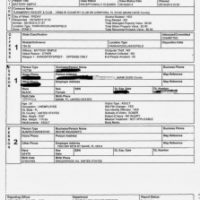 Here is the one page police report from the Adventura, FL police department concerning Richie Incognito and his sexual assault of an African-American woman. Notice that Incognito’s consumption of alcohol is referred to as being a factor in the incident harkening to the video of his likely drunken N word bar rant. 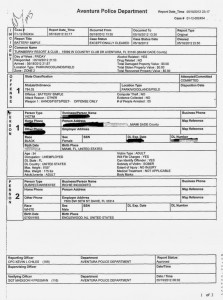 Allegedly, Incognito assaulted this 34-year-old female volunteer at the Dolphins Annual Golf Club tourney by using a golf club on her private parts. Here is what happened according the victim.

He then poured a full bottle of water on her face while shouting ‘Let it rain! Let it rain!” There was obviously a civil settlement because, it is reported she is bound by a confidentiality agreement. That won’t last long because if there is a lawsuit by Martin, his attorney will be able to subpoena the agreement and question this victim. Once it is out in the open, she will be able to appear in the media, as she will not be bound by the secrecy provisions of any such agreement.

And remember all the supporters within the Miami Dolphins that Incognito supposedly has? Well those supporters may be fellow wrongdoers- or as we say in the law co-conspirators and aiders and abettors. Martin’s lawyer David Cornwell released a statement describing one of the most foul messages sent to Jonathan Martin by another on the team. Here it is in its bleeped grotesque form:

And remember we told you this week the harassment Martin endured had to be substantial– including a malicious physical attack- for him to give up the profession he loved. The word malicious is important in legal circles because maliciousness equals a claim for punitive damages in any lawsuit and it also removes a person from the confines of seeking relief that may be mandated by any NFL contract. That’s exactly what his lawyer has now stated.

“Eventually, Jonathan made a difficult choice. Despite his love for football, Jonathan left the Dolphins. Jonathan looks forward to getting back to playing football. In the meantime, he will cooperate fully with the NFL investigation.”

It’s about time former NFL ballers stop labeling Martin as soft, which is exactly whatVinny Testaverde did in a New York Post column. Dolphins General Manager Jeff Ireland is reported to have fostered this same attitude when he “allegedly told Martin’s agent, Kenny Zuckerman, to tell Martin to “punch” Incognito if he felt abused.“ They are so wrong. I tried many a harassment lawsuit and litigated many to the federal appeals court and the New Jersey Supreme Court. This is exactly the analysis people used in boss to employee sexual harassment cases years ago. The victim need not stoop to violence. It is the conduct of the power monger that needs to be changed. Apparently Incognito was taught the opposite as indicated by his father’s statements to him suggesting violence to meet violence is good.

“I’d always tell Richie, ‘You don’t take no s— from anyone. If you let anyone give you s— now, you’re going to take s— your entire life.’ “

The truth has come out–this locker room conduct is prevalent– and wrong. It needs to be changed. And this may be the seminal case for the NFL.

Incognito has a history and it is undeniable. The issue now is the future. Incognito no more.

This article was first published by Sports Court Media: http://sportscourtmedia.com/2013/11/incognito-priors-nfl-culture-change-coming/